All across Canada, Boys and Girls Club members are accomplishing great things in their community. One such youth has not only found a path for the future through involvement with the Boys and Girls Club in Winnipeg, but has been able to serve as a role model to countless young people throughout her province.

Amanda Worm is a 20-year-old alumnus of Boys and Girls Clubs of Winnipeg. Since moving from Regina seven years ago, Amanda has been an extremely active member of her Club taking part in their Girls Night Out, Youth for Eco-Action and Step Up Employment programs. Through her involvement as a member and volunteer, her peers at the Club realized not only her commitment, but her obvious leadership qualities and she was nominated to serve on the Winnipeg Club’s Youth Council and eventually became a member of the BGCC National Youth Council.

“She is intelligent, mature, and a great communicator,” said Ian Gerbrant, Director of Programs for Boys and Girls Clubs of Winnipeg. “She excels at making everyone feel welcome around her and leaves no one behind.”

This spirit of community leadership she has shown has been recognized across the province. In 2008, Amanda received a Manitoba Aboriginal Youth Achievement Award for her Community Involvement and Volunteerism. In addition to this fantastic honour, awards organizers were so impressed by Amanda that they asked her to co-host the 2009 event.

“It was extremely nerve-wracking, but a great experience,” said Amanda. “It is a very youth focused event and I was proud to be involved.”

Currently, Amanda is studying the Child and Youth Care program at Red River College. She credits Boys and Girls Clubs of Winnipeg with helping her find this future direction. She continues helping her community working with children and youth and serving on a local advisory council called Honouring our Spirits, as a youth leader.

“I want to work with kids and youth to provide them with some of the amazing opportunities that Boys and Girls Clubs gave me,” said Amanda. “Moving from Regina and a sort of sheltered life to the incredible diversity of Winnipeg was eye opening and the Club made it very easy to connect with others and be involved.”

The personal connections Amanda has made through her involvement with both her local Club and members across the country has been her favourite part of being involved in Boys and Girls Clubs.

“I loved being a part of the Youth Conferences,” said Amanda. “This year’s in Saint John, N.B. was a great chance to re-connect with friends. There were so many great people making a difference. It was very inspiring.” 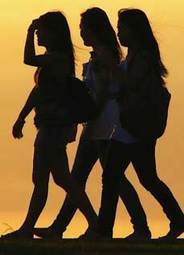