Duaa Al-Atiya immigrated to Canada from Kuwait when she was just four years old. She came with her older sister to live with her grandparents, uncles and aunties, never to see her Dad again, and her mom only off and on until she was 15.

Both girls found a second home at Boys and Girls Clubs of Winnipeg. Duaa’s older sister joined first and would tell her all about the Club, her new friends, and fun activities that made Duaa want to turn six sooner so she could join too. Once Duaa became a member in 2000, she found that just being at the Club and interacting with other children during the drop-in program helped both her and her sister reinforce their English language skills.

Duaa’s family was very busy working and adjusting to the changes in their lives as many had recently immigrated themselves and were trying to build a life in Canada. “I remember going to Wednesday Family Nights alone because I loved the club so much,” said Duaa.

“As a child, I was a little confused about my living situation and always felt a little different from other kids. This is why I enjoyed Boys and Girls Clubs so much – they treated everyone as an equal and I felt normal there.

I am now going to the University of Manitoba and hope to further my education in either psychology or business. Managing in the hospitality industry keeps me pretty busy too! Life is good. I have my mom, stepdad, sister, uncles and aunties and many friends.

In 2013, I decided to host an Industry Brunch Party that raised over $4,000 for Boys and Girls Clubs of Winnipeg. It was my way of giving back for the joy I experienced in my childhood at Club and for the many years of snacks, outings, crafts, recreation and not to mention the friends that I still have today.

It is exciting for me to be returning to the Winnipeg Capital One Race for Kids Committee for a second year. Our goal is to engage 33 teams this year. Last year, I loved going out to do talks at small businesses to spread the word about BGCW. I was even able to recruit the top fundraising team, “The Du” – my gal pals who were able to raise over $2,250!

I hope to see lots of friends out for the next Capital One Race for Kids on June 6, 2015 in The Peg!” 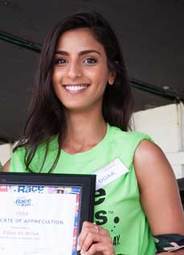