For most folks, paying it forward refers to a one-time event where they return a favor provided to them by another person. But for Majda Miljkovic, paying it forward has become a ten-year commitment as a volunteer to the Winnipeg Boys and Girls Clubs in return for the wondrous assistance and support she received as a youth while attending the Victor Mager Boys and Girls Club in St. Vital.

Majda Miljkovic came to Canada when she was only nine years old, along with her family as refugees fleeing the war that was raging in Bosnia. When asked what it was like during the war, she described it this way, "We were taken in and out of school due to the schools being shut down because of the unrest; every family’s situation was different but our family only left our home twice: the first time to live in the refugee camp in Batnoga, Croatia, where we lived for about six months, and the second time was when we left for Canada."

Her migration to Winnipeg may have seemed like a blessing compared to the dangerous life she left behind, but the tasks of learning a new language and accommodating a different culture were challenging for her and difficult for her family. Her first two years were spent learning English and getting used to her new home, relying heavily on her family for moral support. It was toward the end of her second year in Winnipeg that Majda discovered the Victor Mager Boys and Girls Club. All too many Winnipegers have never heard of the Boys and Girls Clubs of Winnipeg and have no idea what a treasured gem it can be for kids like Majda that are in need of friendship, assistance and support. For Majda, it was a godsend.

"Our move to Canada was very difficult for my parents. It was hard on us kids, but it was tearing my parents apart and they eventually got divorced. Victor Mager was like a refuge for me for when things got tough, a safe place where I was welcome and where I could put my problems behind me. I would go there virtually every day after school and hang out until it was time to go home."

It was at the Victor Mager Boys and Girls Club that Majda met Glen Williams, the manager of the club. Glen helped introduce Majda to the various activities that the club could offer and helped her to fit in with the other kids in spite of the language and cultural differences. Glen remembered it this way, "When Majda first came into our club, she was shy and a bit reserved. But it didn't take long before she was just like one of the gang here. She made friends easily and was quite popular with all the kids. The staff just loved her, we became so used to seeing her here as there was hardly a day when Majda wouldn't come in."

As Glen got to know Majda better, he saw something special in her. "She is just one of those people that are always giving. She loved doing art work and would spend hours helping the younger kids with art projects and talking to them about their problems. She had amazing patience and a genuine concern that you could just feel whenever you were around her."

It was during her first year of university that Majda decided she wanted to become a volunteer with the organization, so she reached out to Heather Black who was the Volunteer Coordinator for the Boys and Girls Clubs at that time. Majda soon joined the Victor Mager Boys and Girls Club as a volunteer, a role that she would play two days a week for over three years. Glen describes her as a model volunteer, one of the best he has ever worked with. "The kids just loved her, especially the girls. You always knew when Majda arrived at the club because the room would be filled with the sound of kids screaming 'Majda, Majda! Majda's here!' Some of the kids would race over to her, grabbing her around the waist or clinging to her legs so that she could hardly get through the door."

It was during her second year of university that Glen Williams recommended Majda for the Future Shop Future Leader Scholarship. She recalls her scepticism when he first suggested it to her. "Glen told me about the scholarship and I thought 'no way was I going to get it', but he kept encouraging me so finally I agreed to apply. And what do you know, I got it! I knew that my parents simply weren't in a position to finance my post-secondary costs, so I really wanted to complete my studies with minimal debt. Receiving news of the scholarship was one of the best days of my life. I know first-hand what a privilege it is to go to school, and that many, like my mother when she was young, did not have the opportunity to receive financial aid like I did. I ended up getting many other scholarships and bursaries in later years because of my volunteer work with the clubs. "

The facilities that the Boys and Girls Clubs of Winnipeg provide to inner-city youth are endless and critically essential. The scholarship that was awarded to Majda is just one of numerous scholarships with which they try to connect their members. The clubs coordinate with other social agencies such as Winnipeg Harvest to provide meals to kids. They provide a myriad of after-school programs which include sports and recreational activities, arts and cultural opportunities, and educational and career exploration. New programs are constantly being developed to assist youth, such as the CSI (Community School Investigators Summer Learning) Program that helps kids review what they had learned throughout the school year so that the transition back to school in the fall will not be so difficult.

The scholarship provided to Majda through the Boys and Girls Club accounted for only part of her university costs, so during her first few years attending university Majda worked part-time at the Earl's Restaurant at St. Vital Center. Working part-time and continuing to volunteer two days a week at Victor Mager while also attending university fulltime speaks boldly of her strength and determination. After her third year as a volunteer at the Victor Mager club, Majda was approached by Ian Gerbrandt, Director of Programs at the time, who asked if she would like to become a Youth Member on the Boys and Girls Clubs Board of Directors. Majda agreed and spent the next seven years assisting with the administrative management of the clubs. After one more year working on the Board of Directors, Majda will have fulfilled her eighth and last eligible year to be on the Board of Directors. When asked what she would like to do next, she didn't hesitate, "I feel like the Boys and Girls Club is part of me, I just have to stay involved. I am thinking I will continue volunteering with the special events that the clubs hold throughout the year."

Partway through her seven-year term on the Board of Directors, Majda graduated from the University of Manitoba with a teaching degree in social sciences, and currently teaches at Maples Collegiate in Winnipeg. "I always stress to my students that while academics are important, it's crucial to get involved and give back to their community. Volunteer work is just as, if not more, important than grades."

It seems ironic that so many Canadians today are resisting refugee immigration and asking 'What are the risks to us?', when it is so clearly apparent that every one of us should consider a person like Majda and ask instead 'What are the benefits to us?' The contributions that Majda Miljkovic has bestowed upon all Winnipegers are a testimony to the power and goodness that lives in all of us, and which are in a way, the perfect example of what the Boys and Girls Clubs emanates and strives to bring out in its staff, its volunteers and the youths that it serves. 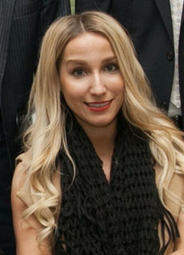