I am honoured to have the opportunity to share my personal connection to Boys and Girls Clubs of Winnipeg.

I came to Canada as a refugee in the mid 90’s. My journey to Canada began in the spring of 1991 in Bosnia, my home country. I was nine years old and completing grade three.

Former Yugoslavia was already in the process of break up which initially began with political rhetoric, divisive language, and mindset that one ethnicity was better than another. At the time it seemed distant, we couldn’t believe that someone was going to hurt us; we had Europe’s 4th largest Army to protect us.

Well that rhetoric turned into clashes and to full out wars in Slovenia and Croatia, but even then we couldn’t believe that someone would uproot us from our homes, where roots go back many generations. As rhetoric grew louder the sounds of war were coming closer, and in the spring of 1992 my worst nightmare was happening.

In the first week of this terrible war, my house was burned to the ground. We had absolutely nothing; no clothes, no shelter, and no food. The next few weeks were brutal as my family had to hide in the mountains, suffering from starvation while under constant threat of being captured. Throughout the war I survived several military attacks and lived in three refugee camps before my family reached the safety of Croatia.

My parents wanted a better future for us so they decided our family would escape to Canada. On April 27, 1995 we left Croatia and arrived in Winnipeg.
The war was still putting my family under a great deal of stress and it all seemed like one long nightmare that I was hoping to wake up from.

My first day at school, I was introduced to the Boys and Girls Clubs of Winnipeg. Victor Mager Club quickly became a place where I could forget the past three years and play sports or computer games. It was a safe place - a sanctuary where I could once again just be a child.

As I became more involved, I realized that the Boys and Girls Club is a lot more than just a safe place for youth. It gives young people the opportunity to make positive life choices. For me, it became a gateway to our community; it was a place where I had the opportunity to experience things like camping, Jets games, Bomber games, leadership programs and many more. It was a place that provided mentors and allowed me to work on my communication and leadership skills.

Boys and Girls Clubs of Winnipeg was also a place where I got my first employment opportunity through Green Team and later on as an Activity Worker while I attended the University of Manitoba and completed my Finance degree.

Several years ago, I had completed my accounting designation and was faced with some hard-earned extra time so I was looking for volunteer opportunities. So what better than to complete the loop and join the Boys and Girls Clubs of Winnipeg’s volunteer Board of Directors? It has been an amazing experience and a great learning opportunity. 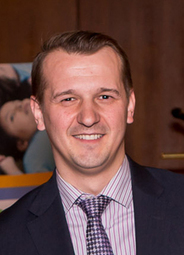